Well at least for the next 4.5hrs..... turns out red planes do not fly faster, they do not fly at all. After spending nearly 2.5 hours sitting on the tarmac cause our brand new plane had problems with its flaps they decided it was a lost cause & ushered us off but I did make sure I got my free crisps & drink first. We are now sitting round waiting for a plane from Leeds to come and get us. I’m working on better to be safe than sorry & just thankful we don’t have connecting flights however I think I’ll be sick of this view shortly... 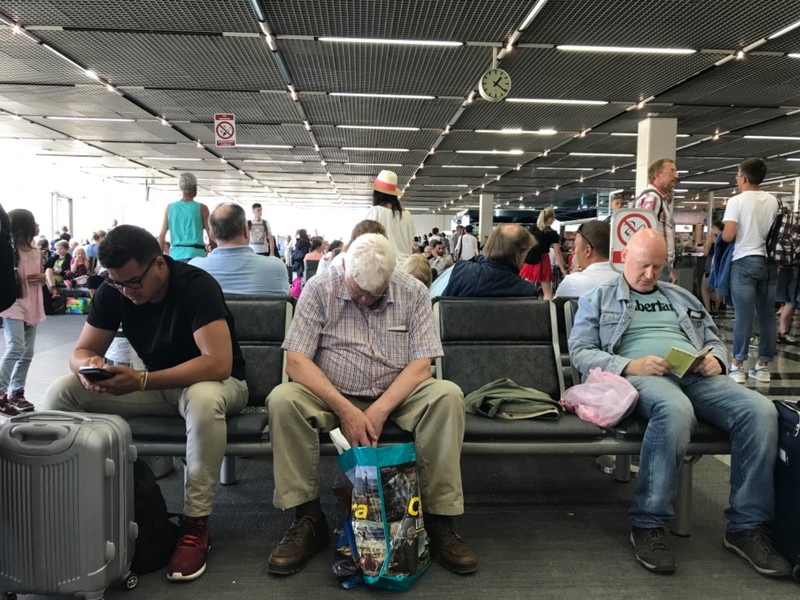 Should mention it’s probably not a bad thing to be grounded with out luck today our airport transfer (guy managing our apartment) forgot to turn his lights off in his car....he had to push start the car.....

This has been our Split breakfast spot often grabbing a pastry on the run or taking time to sit on the edge of the harbour. 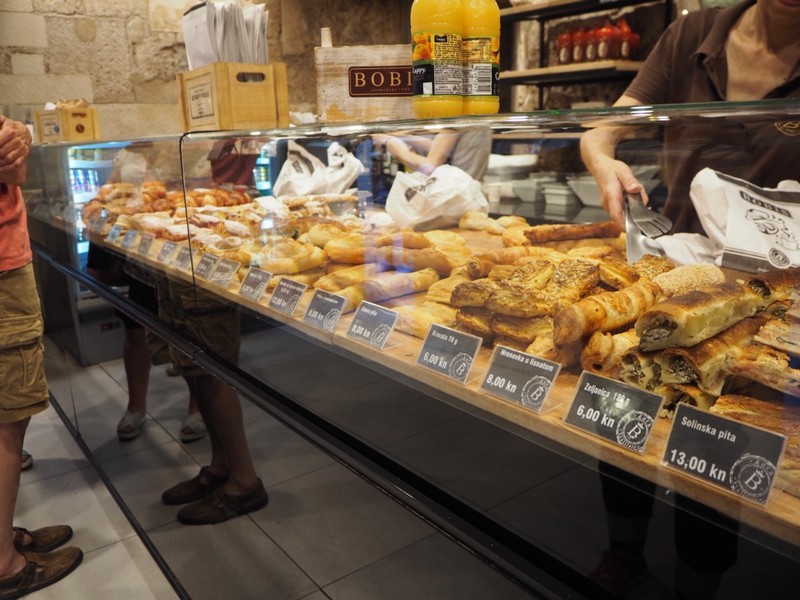 Before the crowds could appear we took a look at the cathedral, crypt & temple of Jupiter, all interesting places. As we still had time we snuck down and explored the basement of the Palace and marvelled at what was. We were lucky to catch some of the singers in the vestibule, the were fantastic a bit like acapella. 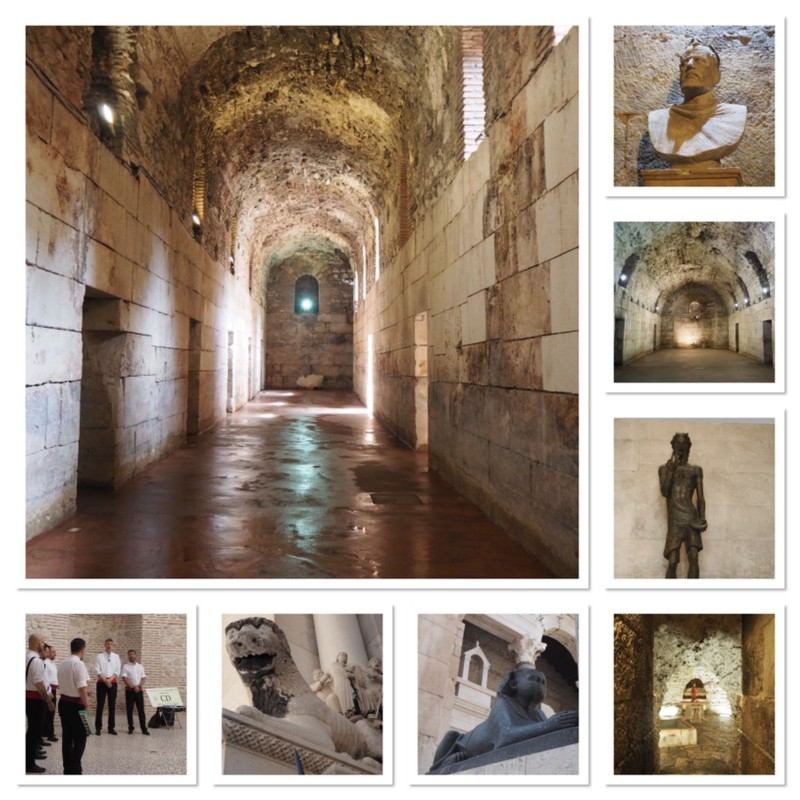 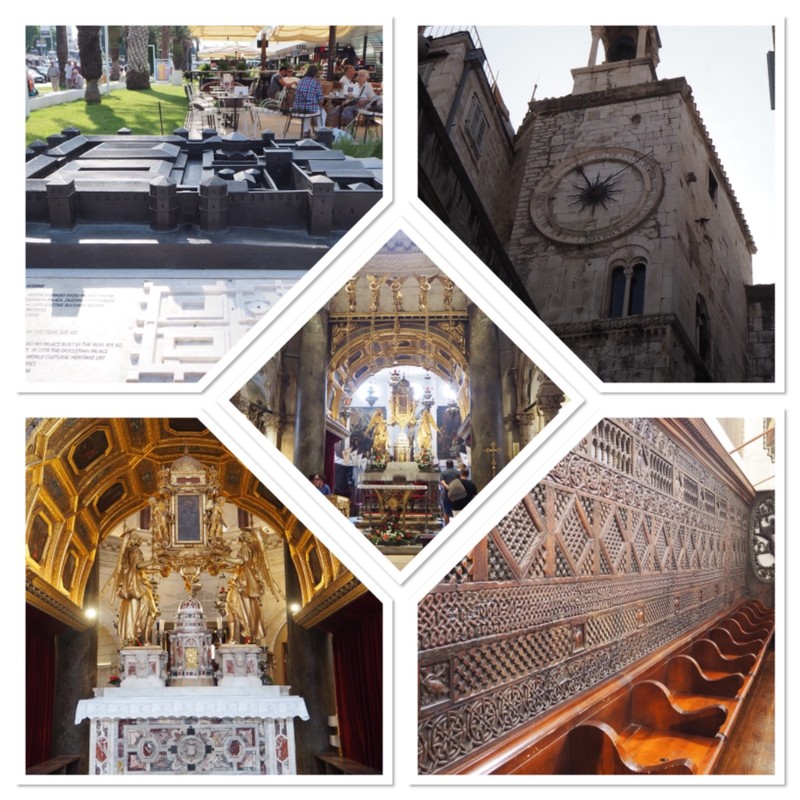 We had arranged a tour to Omis with a traditional meal cooked under a bell and were lucky to score our tour guide from our night walk plus another one learning the ropes for that tour, they were great so lunch felt like you were dining with old friends, Omis was a pretty little town few mountains, a river & even a beach. We travelled into the mountains where we went to a Croatian couples home, the had home made prosciutto with cheese & bread for starters. We sampled some hazelnut liquor which was strong, I also tried some of there red wine with lunch it was good. Funny as your driving through the mountains they use every bit of fertile land there’s rocks never mind we can still fit some grape vines between them. However the best part was the main meal veal & potatoes, veal was perfect with a slight crunch on one side and the spuds to die for, they got a little offended when the four of didn’t eat it all. We were also treated to some of there cherries for dessert, let’s just say we rolled onto the bus. 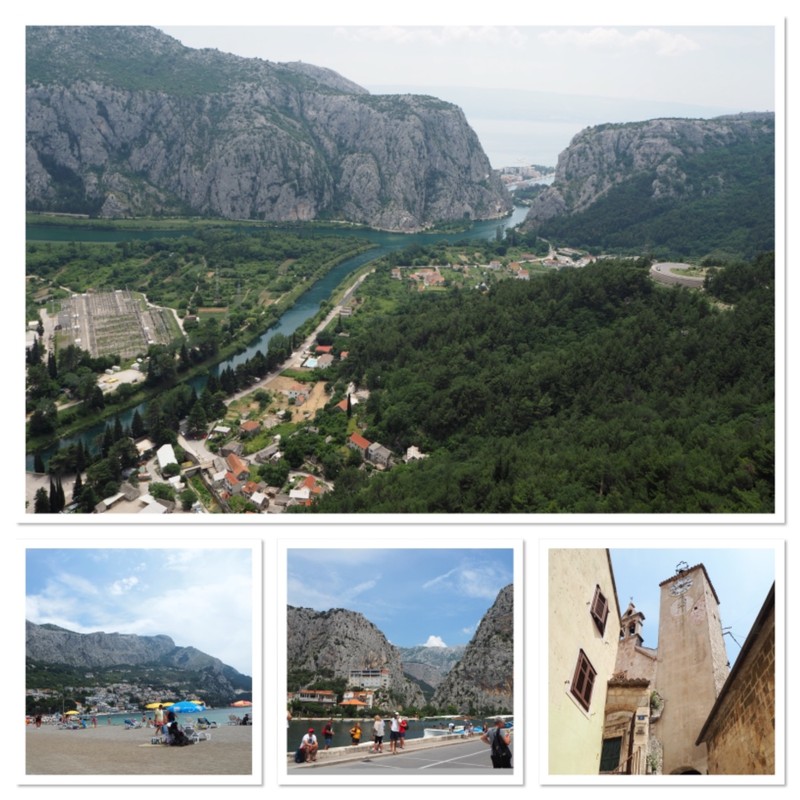 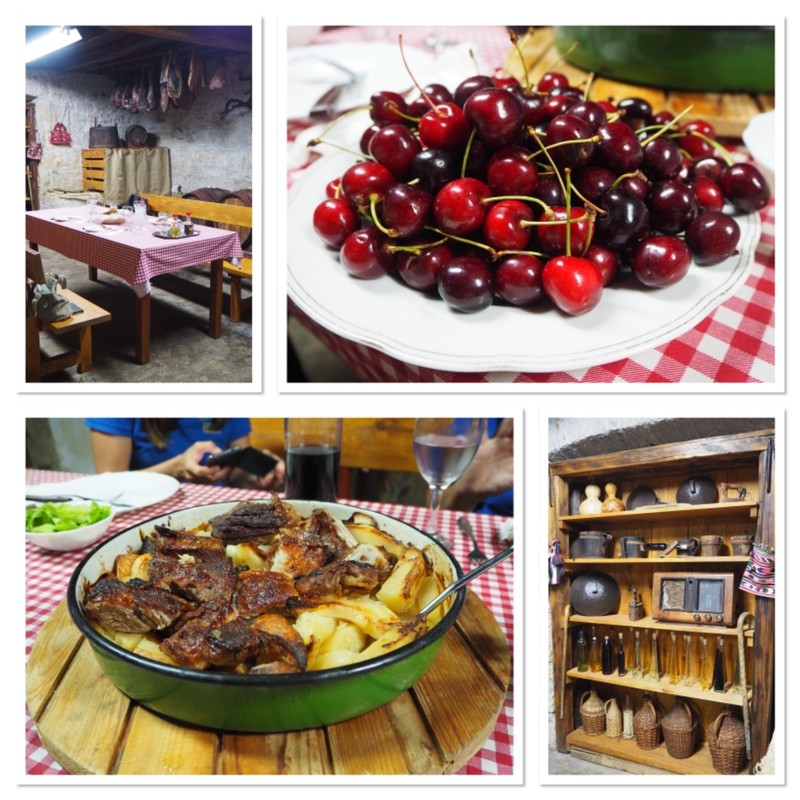 If you want me I’ve moved my treehouse with air conditioning to Split where I think I’ll stay and live off red wine, pizza, fresh bread, cheese, shrimp risotto, pizza & gelato, however I think England might be calling maybe I best catch that plane tomorrow....

Want to see my thousands of pictures of Plitvice Lakes?

We started our day by rubbing the big toe of Grgur Ninski for good luck, he really is an interesting statue. There was also a chance to have a quick look around the Palace before grabbing breakfast from our favourite little bakery Bobis. 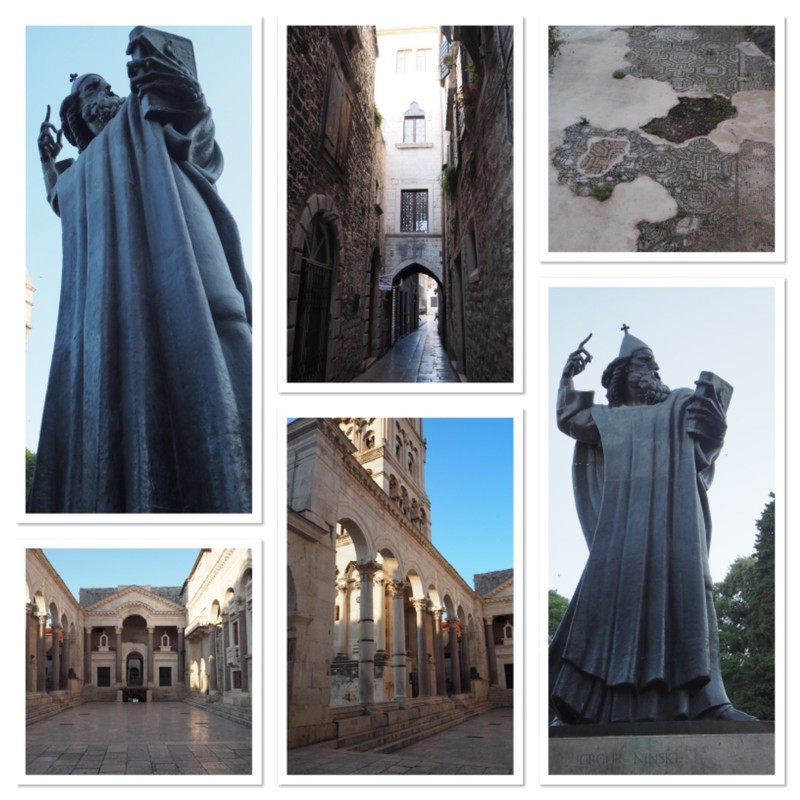 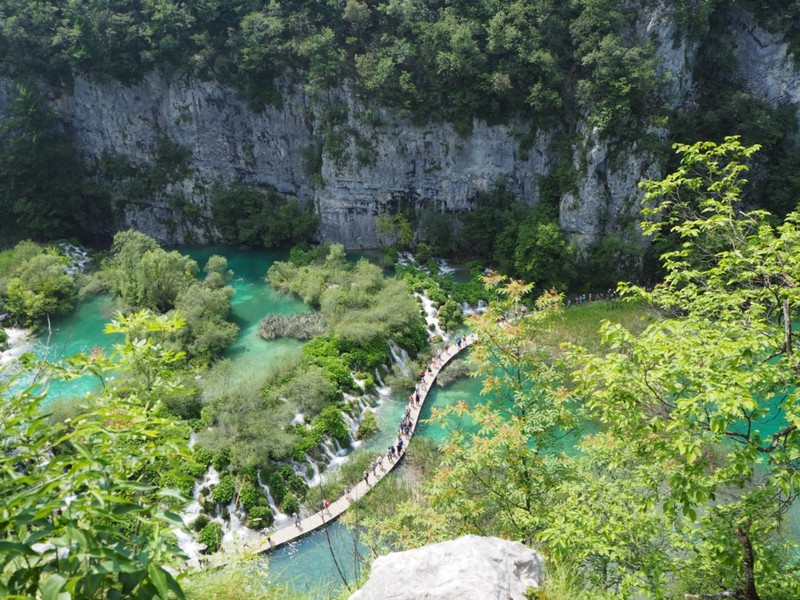 We were lucky to have a fantastic guide & a great driver for the day, the scenery and stories on the way was interesting, who knew you could go through a tunnel in a mountain and pop out in like a completely different climate??? The lakes are beautiful, the colours of the lakes, the clearness of the water, the pretty blue dragonflies, the waterfalls with names like big splash & the big one, we picked our time right to see them before the crowds and before the falls decrease. Anyway enough just look at the pictures there far more interesting than my words. 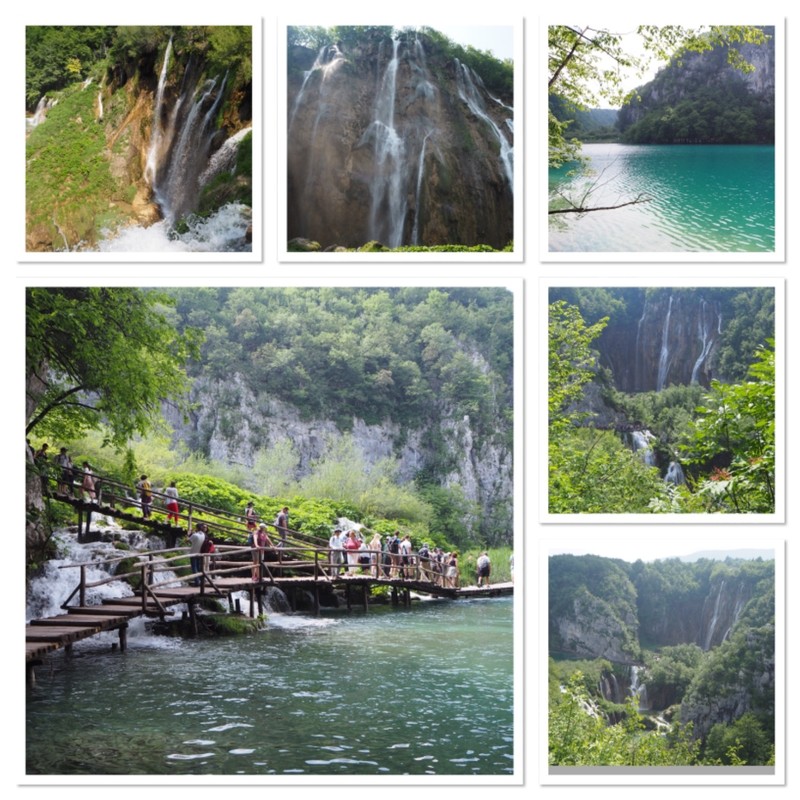 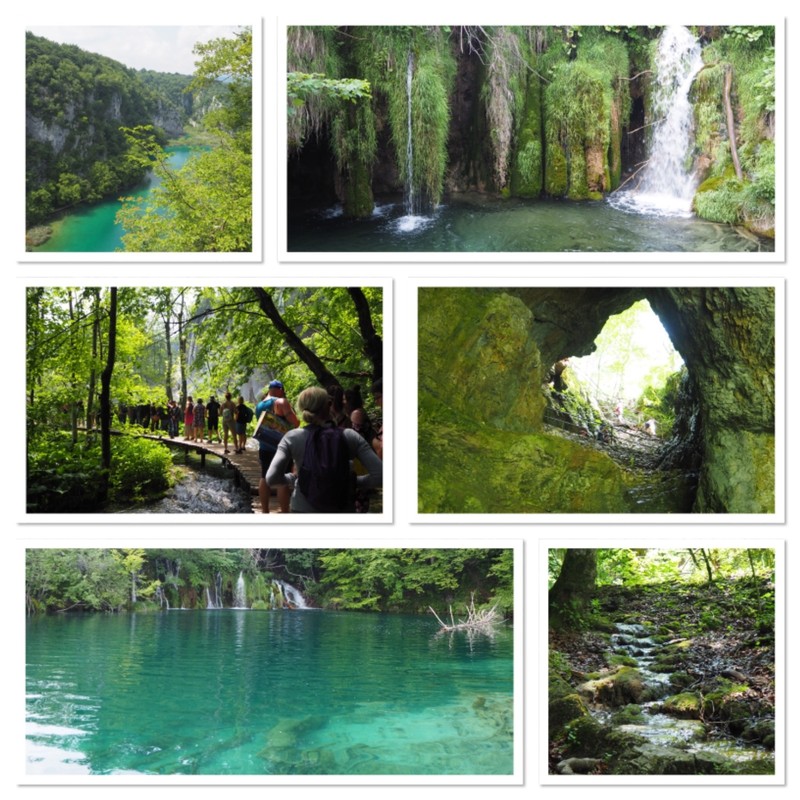 Up early to avoid the crowds but not the heat, I think it was 30 hot & humid.

Our planned afternoon hike was cancelled so someone (not me this time) wanted to go to Marjan Hill which ended up been a hike. We peaked a little too early when we saw an empty flagpole thinking we had reached the summit only to turn around to see the Croatian flag on another point. We took hike trials, roads, looked at churches, things we had no idea what they were. It was totally worth it, including getting lost trying to find our way back to the city. Maybe not so impressed about the number of steps we went up. 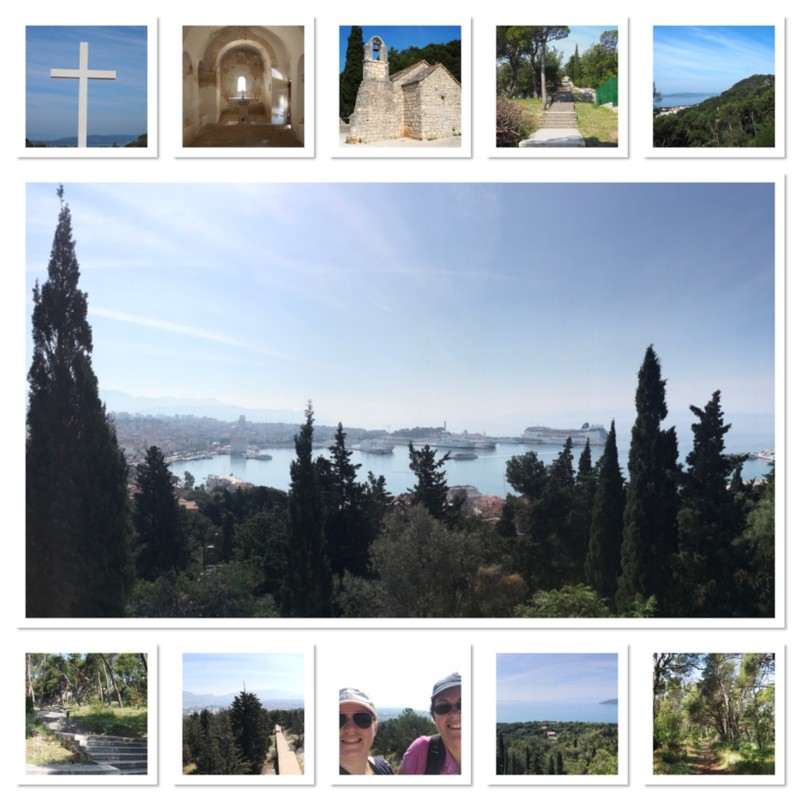 After a couple of hours recovering under the air con we braved the streets again where we discovered a evening walking tour sounded great so we signed up then realised how much walking we had already done. However we learnt about the Diocletian’s Palace which is the area we are staying & what really killed us back up Marjan to the first view point which was worth it. 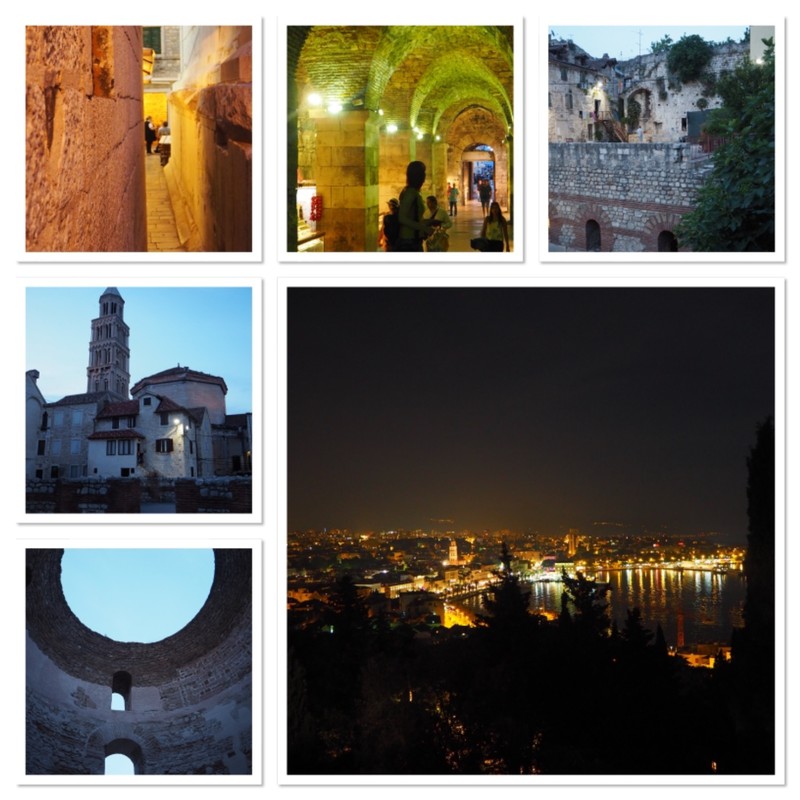 Wheels on the bus go round & round

Today we escaped the heat by busing it between Dubrovnik & Split. The thermometer was saying 30 when we left & it was muggy. The bus started out a bit like normal bus but the other side of the Bosnian border it became more like a Transperth bus stopping at random stops picking up locals who seemed really happy about sharing the bus with tourists...Not! The views were great, winding round mountains not so great, hanging for a straight road. I did notice wine stops so I assume the Croatians stop for wine like we’ld stop for coffee. 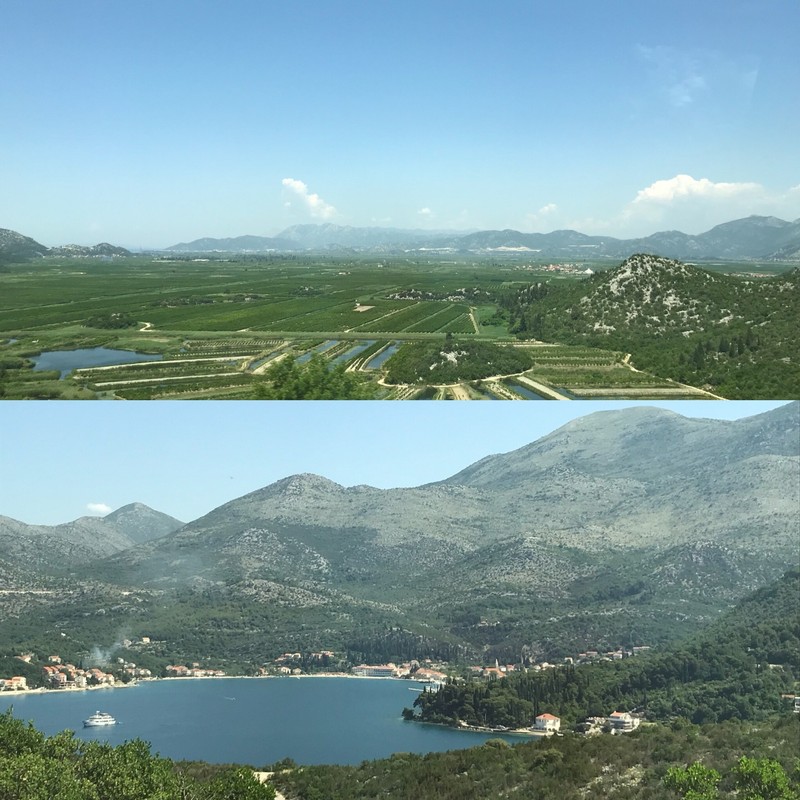 Our apartment is kinda cool, it’s in the Golden Gate the biggest & grandest of the Split city gates. There’s this little door in the side a bit Alice in Wonderlandy really, up some stairs & we’ve got a little one bedroom apartment. 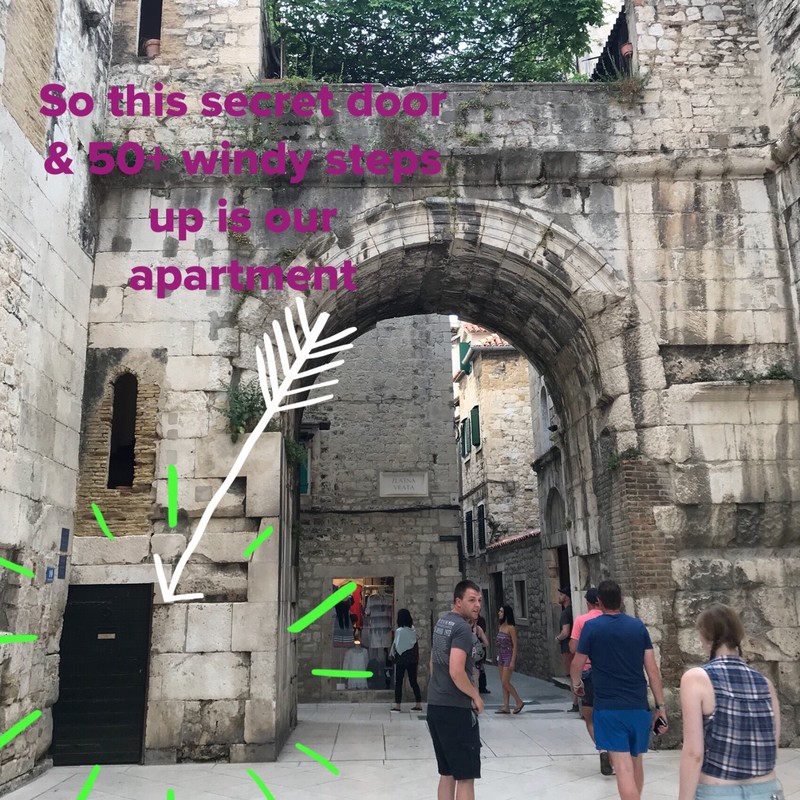 We ducked our for a quick look & some food, I decided to be brave something different can’t go wrong two nights in a row (let’s just say I won’t be having black risotto with cuttlefish again) and I was right. We tried a traditional meal of beef & potato dumplings, very nice. 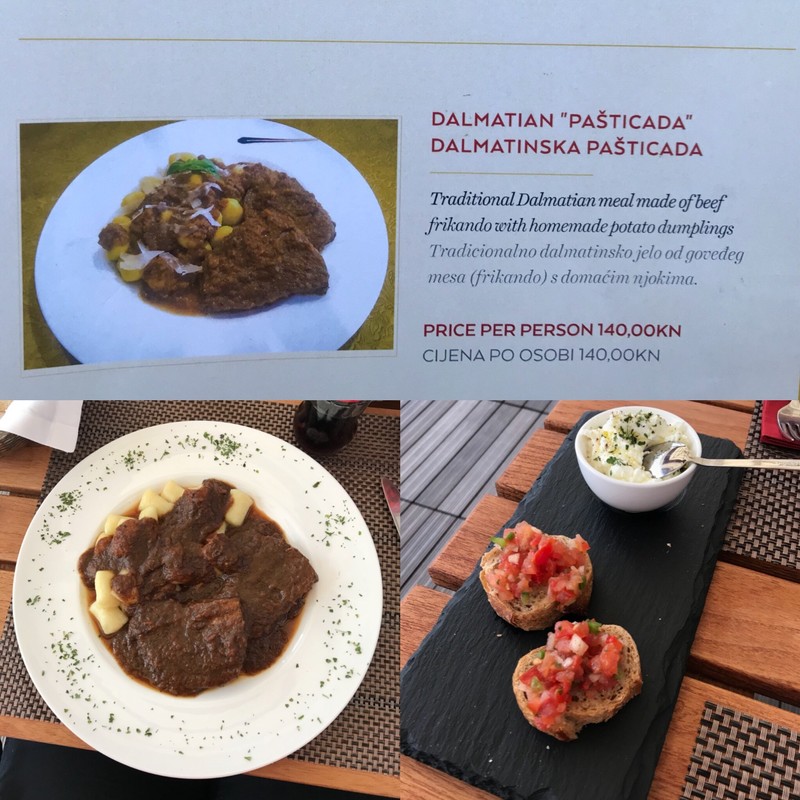 While roaming the alleys we stumbled across not one but two weddings, what a fan fair in this little square. There was bands walking round playing, someone carrying the Croatian flag, dancing, singing & one topped it off with some flares. I actually think they may be playing again outside our window. 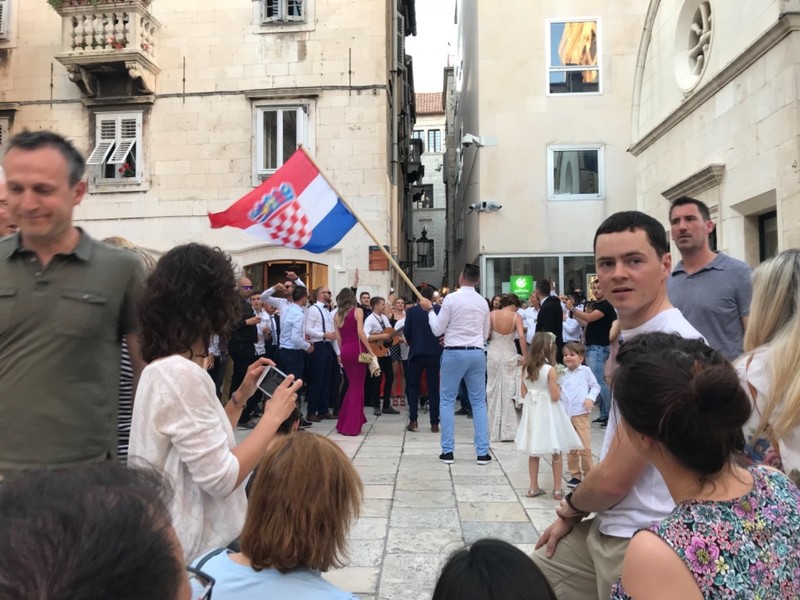 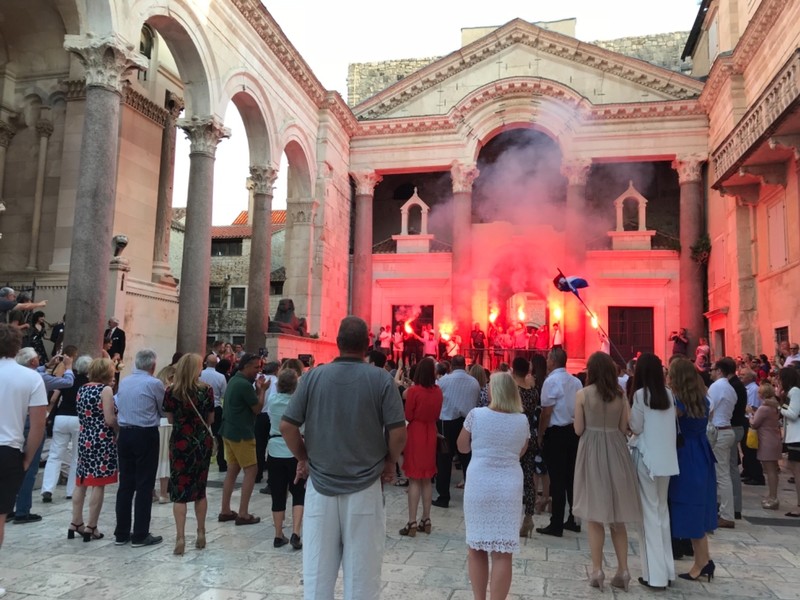